Toyota Central Motors would like to share some glimpses of the meeting with Team - Toyota Asia Pacific Mr. Seow Xie Chean, Mr. Daniel Tan Wei Teck and Mr. M. Alam Ayub (TMAP). It was indeed a fruitful meeting where the future of Toyota vehicles and Sales were being discussed. 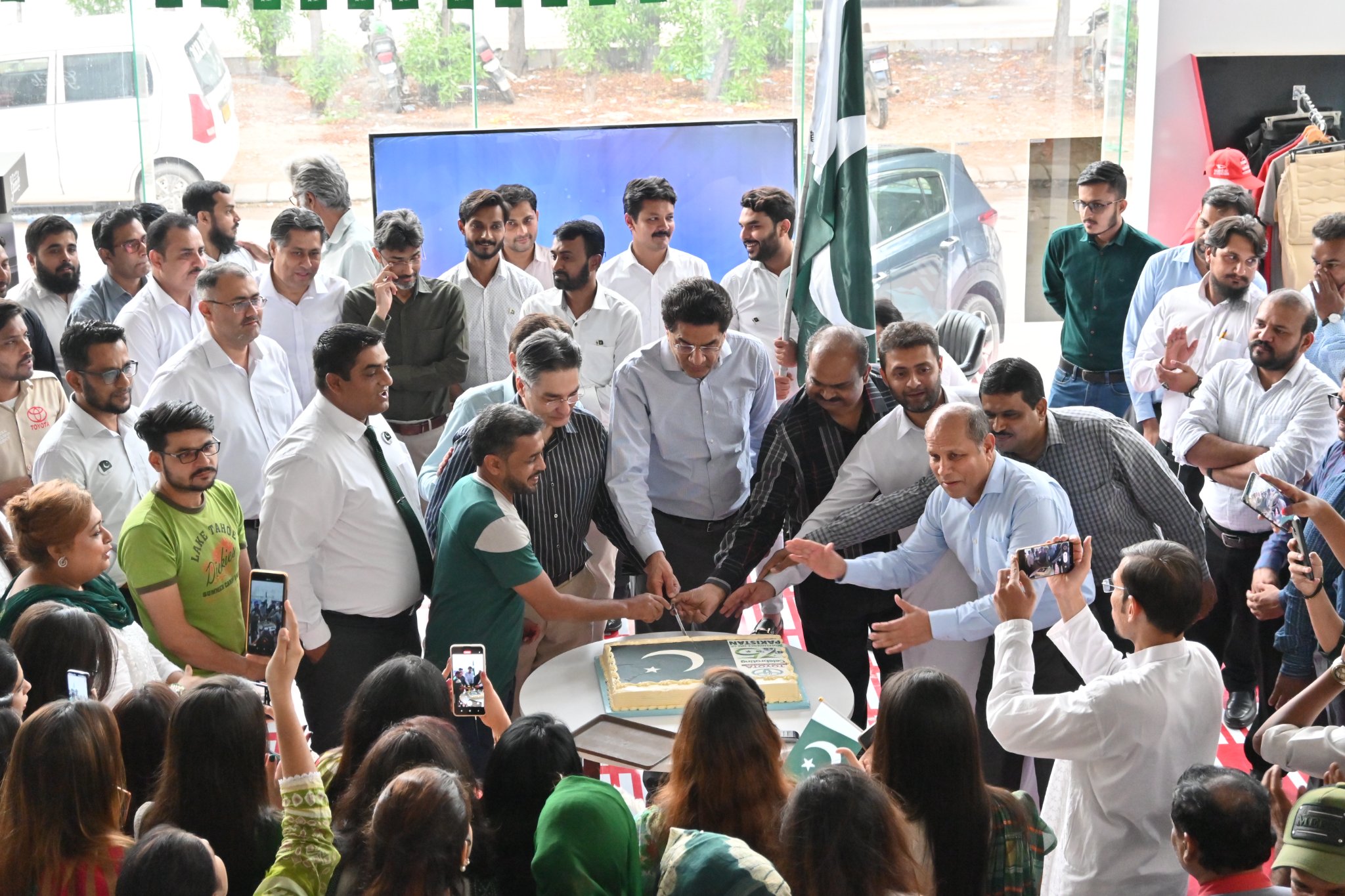 Toyota Central Motors celebrated the Pakistan's Independence Day 2022 at our dealership with full passion and enthusiasm. 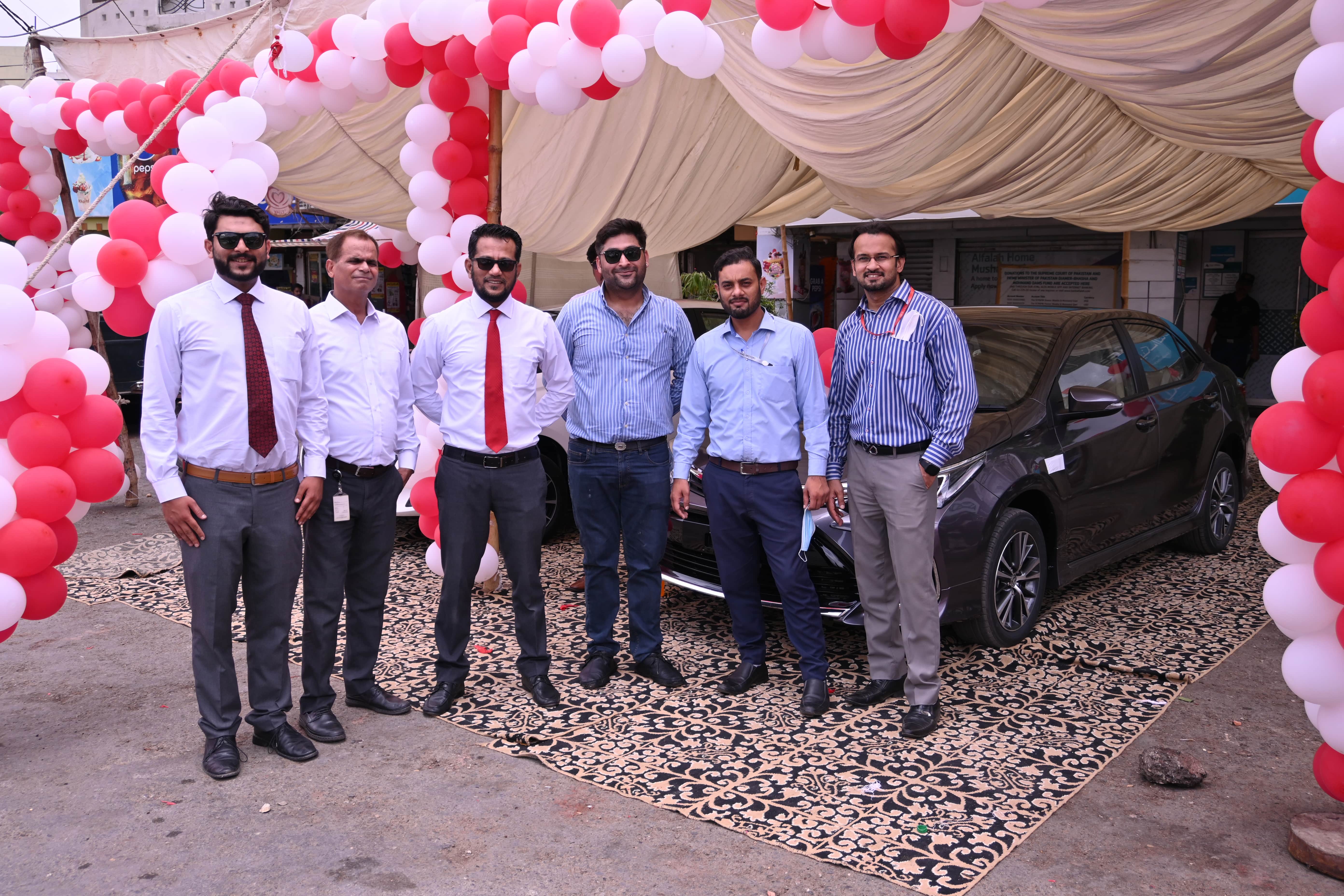 Toyota Central Motors had the Road Show with Bank Alfalah at their Bahadrabad Branch. Our Corolla 1.6L Special Edition and Yaris ATIV X CVT were on the display which grabbed a lot a of attention of the public and positive leads were generated accordingly. 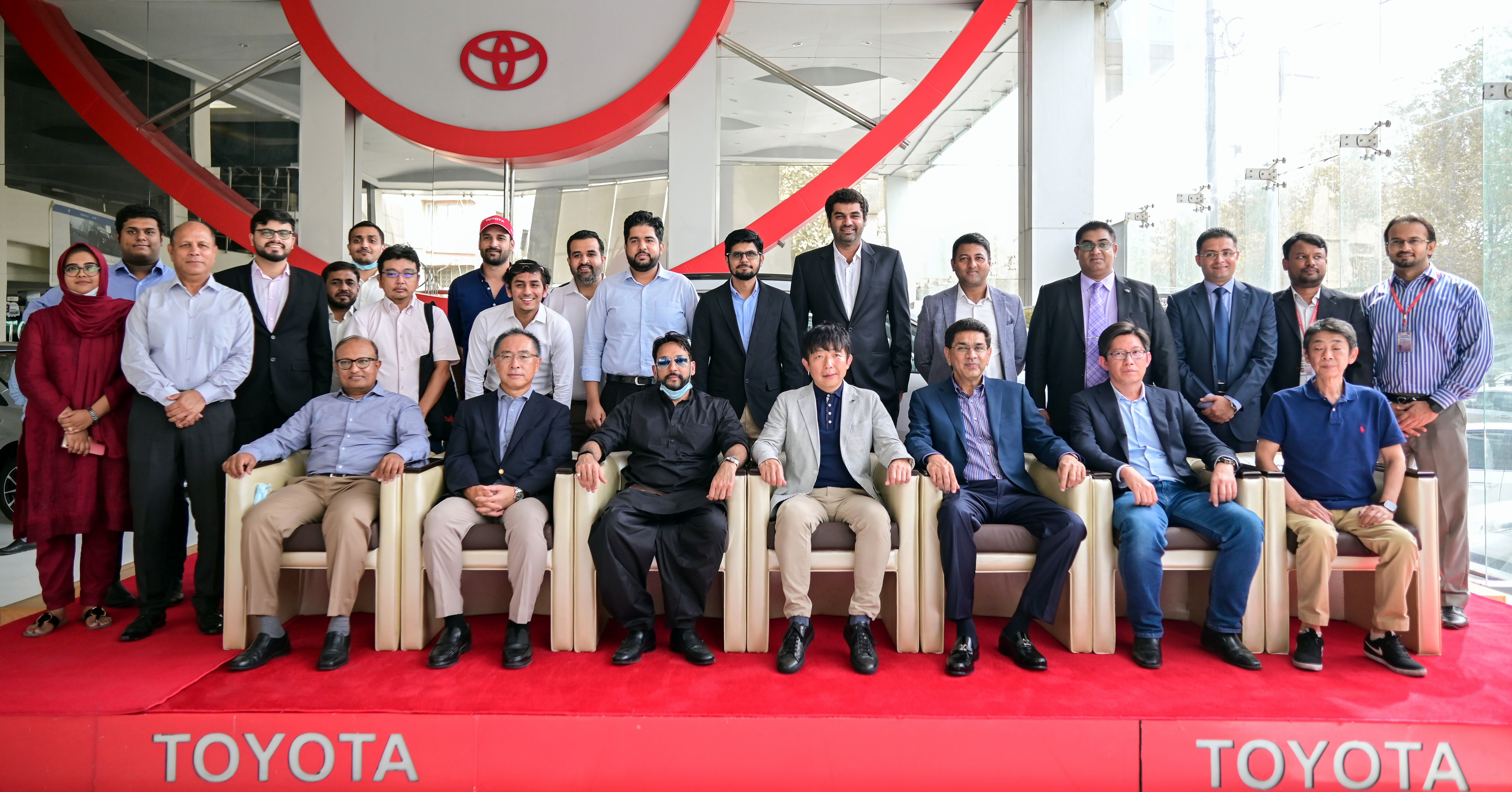 Toyota Central Motors had the great opportunity to welcome the High Official Delegations from Toyota Motor Corporation Mr. Yoshiki Konishi – CEO TDEM, and Mr. Bryant Heng Choon Woo – General Manager TMAP along with Mr. Shinji Yanagi – VC IMC and Mr. Ali Asghar Jamali – CEO IMC, to visit our dealership and to celebrate the IMC’s 1 million Sales milestone with us. It was a fruitful meeting where the future of Toyota vehicles and Sales were being discussed. We look forward to have more visits like this for a better and mutual understanding with Toyota personnel.
Toyota Central Motors was being visited by Mr. Ryuzo Miwa, Vice President- TDEM (Toyota Daihatsu Engineering & Manufacturing Co. Ltd. The purpose of the visit was to discuss the future of Automobile Industry and opportunities this great Pakistani market holds within itself.
Toyota Central Motors Inaugurated our Newly built Body & Paint Department's Reception area.
Toyota Central Motors celebrated Women's Day 2022 in our dealership.
Indus Hospital & Health Network Golf Tournament at Karachi Golf Club, co-sponsored by Toyota Central Motors. Our Yaris 1.3L GLI was on display for the hole-in-one prize.
Toyota Central Motors was being awarded by the Senior General Manager Sales & Marketing Planning IMC, Mr. Abdul Rab for being the Champions of selling highest Prepaid Periodic Maintenance (PPM) and Toyota Protection Plan (TPP).
Once again we proved ourselves to remain the best in town!
Toyota Central Motors performed a CSR Activity on the 31st December’2021 in collaboration with Indus Hospital by arranging Blood Donation Day for the needy one’s at our dealership. 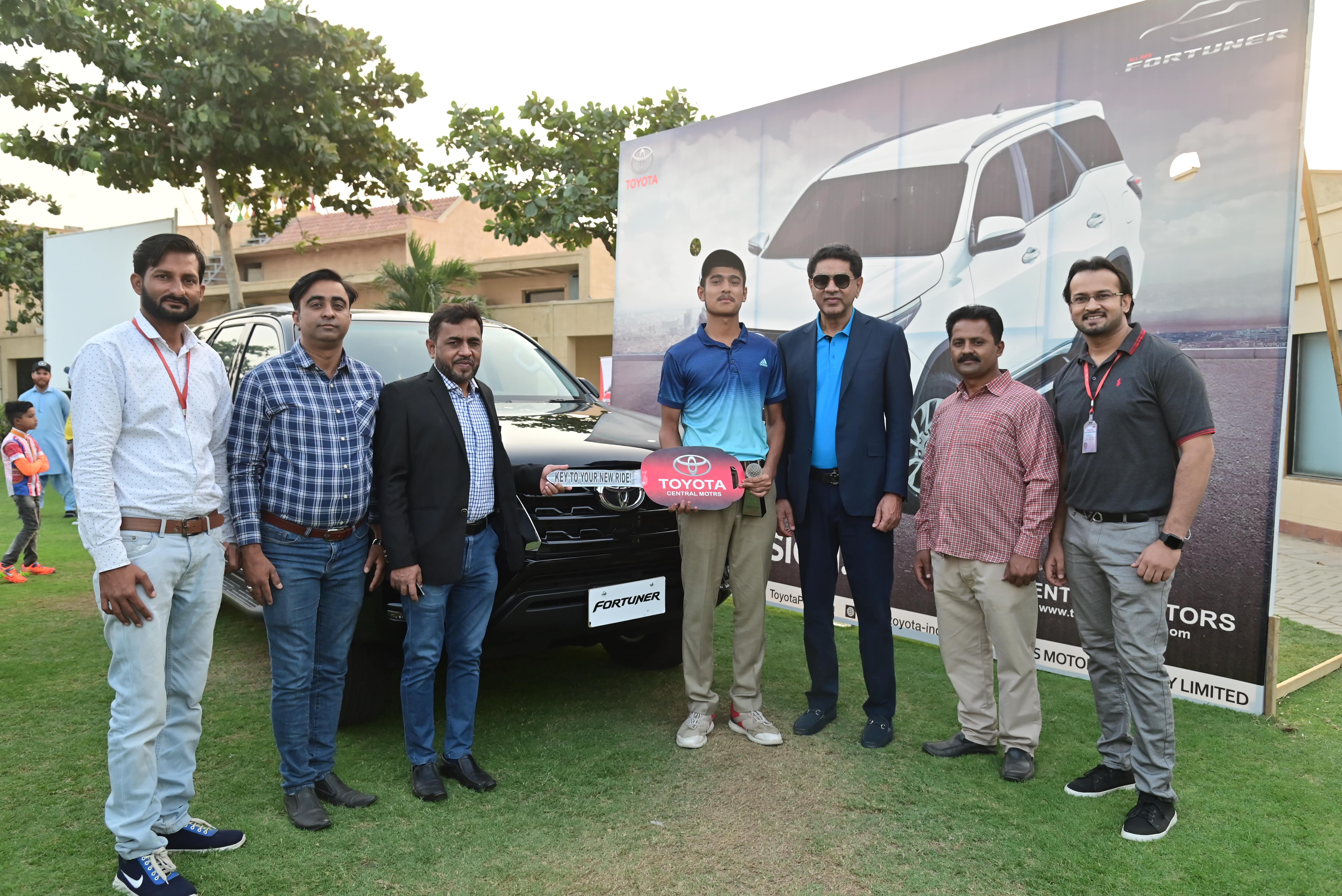 Toyota Central Motors organized a Road Show collaborated with HBL (Iqbal Liberary Branch, Karachi) in which Toyota Corolla-X and Toyota Yaris were being promoted for HBL's financing plan.
We had the privilege and honor to welcome Mr. Shinji Yanagi (Vice Chairman of Toyota Corporation), Yoshihiro Lkegame (Senior Executive Coordinator and Alternate Director of Toyota Corporation) and Mr. Kazunori Kihara - KD Business Department Toyota Tsusho Corporation). The delegates were given a walk around of the entire facility followed by a brief presentation to discuss the current market situation and how well we are geared up to face the upcoming challenges with our dedicated customer services.
Toyota Central Motors celebrated the Record Sales of 7001 Units sold by IMC in October 2021.
Toyota Central Motors once again stands victorious as “Champion”. Our 2 champions made the record from Body & Paint Dept. We congratulate both of them, “Mr. Sabir Hussain” National Champion from Technician Body & Paint category and “Mr. Shahwaiz Ali” from Service Advisor Body & Paint category. Thanks to Almighty ALLAH for keeping us Champions as always!
Toyota Central Motors would like to congratulate Mr. Nasir for winning the hole in one hit prize Brand New Toyota Yaris, which was given by our respectable Director, Mr. Shahzad Godil at the Open Golf Championship 2021 held at DHA Golf Club, co-sponsored by Toyota Central Motors. 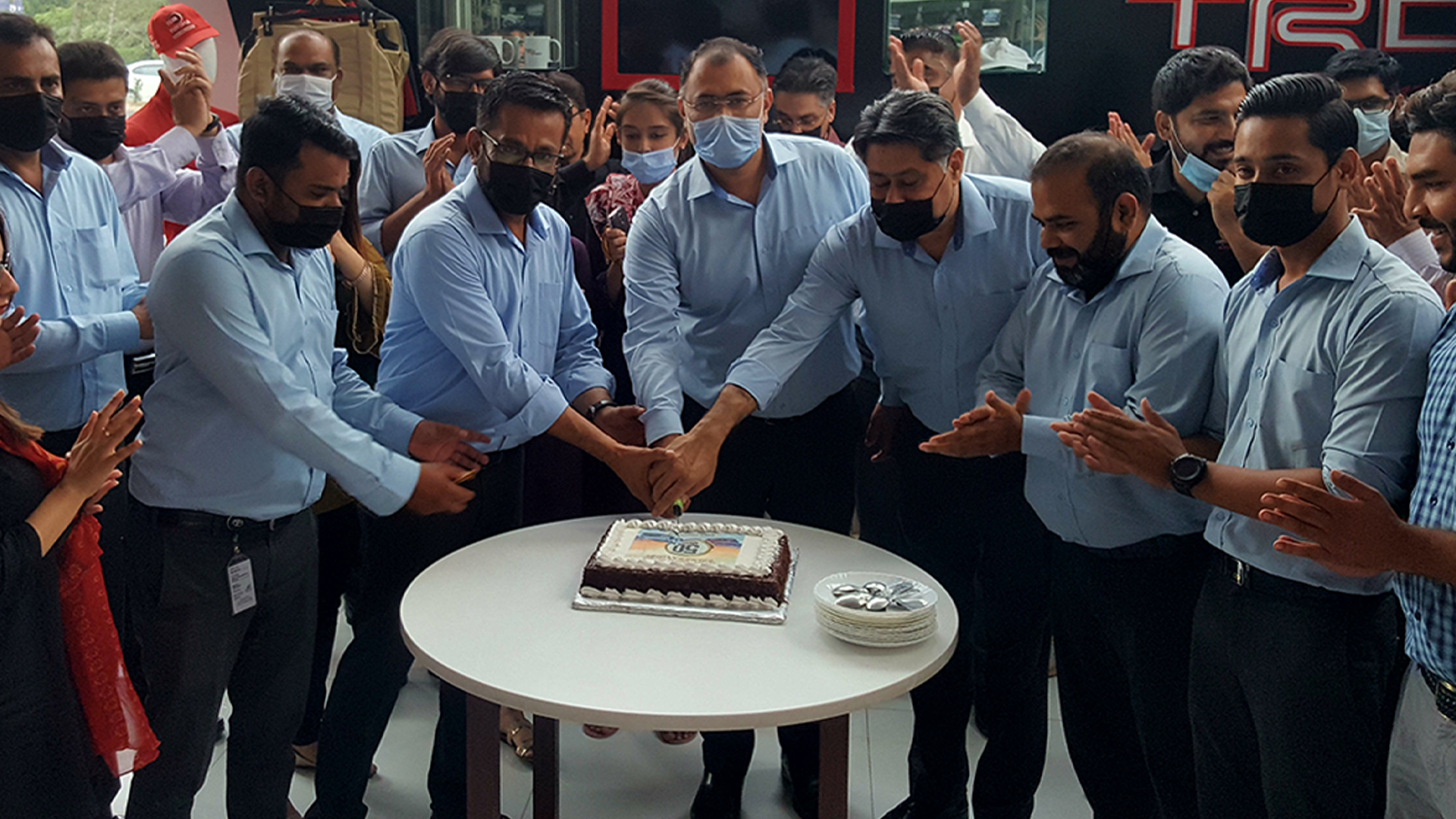 This CSR activity was done in accordance with complete SOPs regarding Covid-19.
Toyota Central Motors organized a road show in collaboration with HBL (Nursery Branch, Karachi) on 3rd March 2021. It was done to promote our newly launched vehicles Toyota Corolla-X and Toyota Yaris.
Toyota Central Motors celebrated the overall sold out units in Pakistan, a number of 6710 vehicles in the month of February 2021. 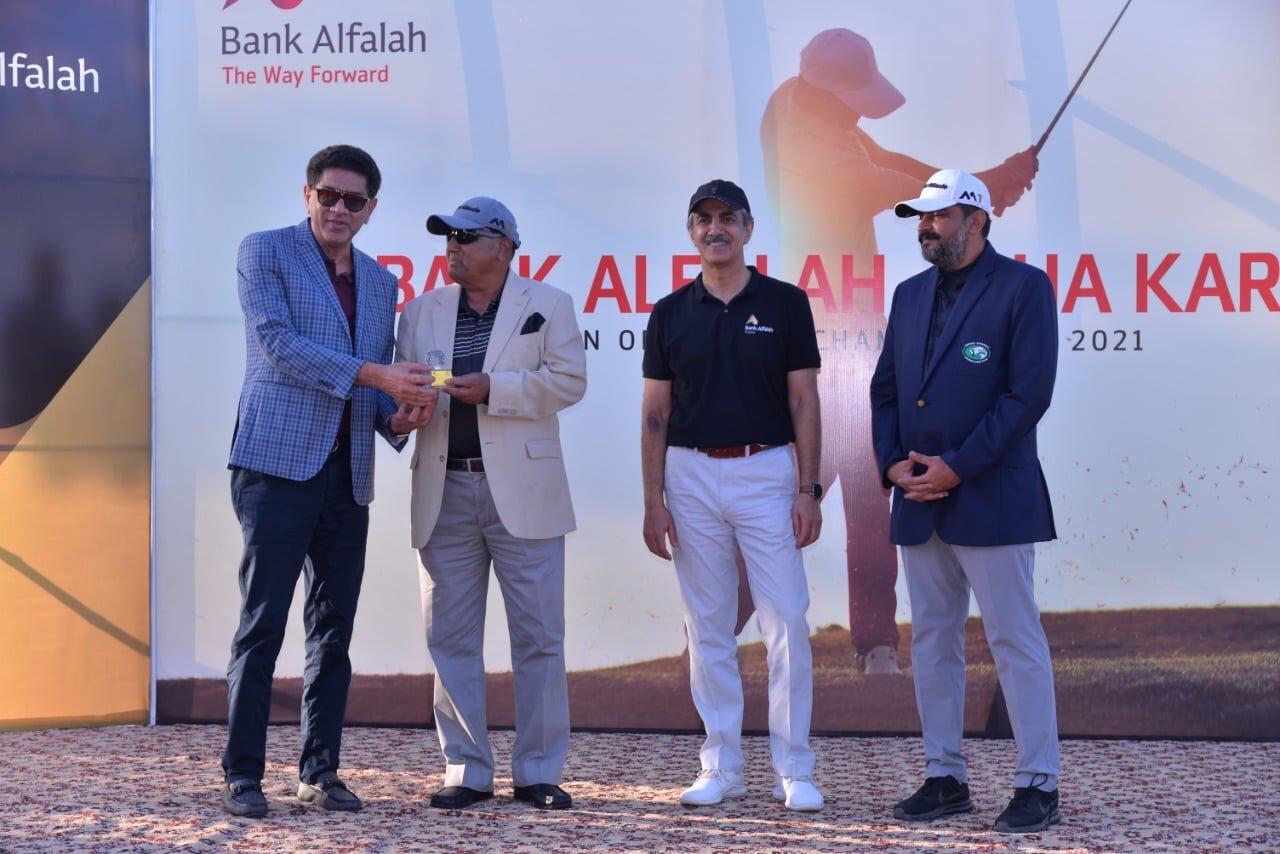 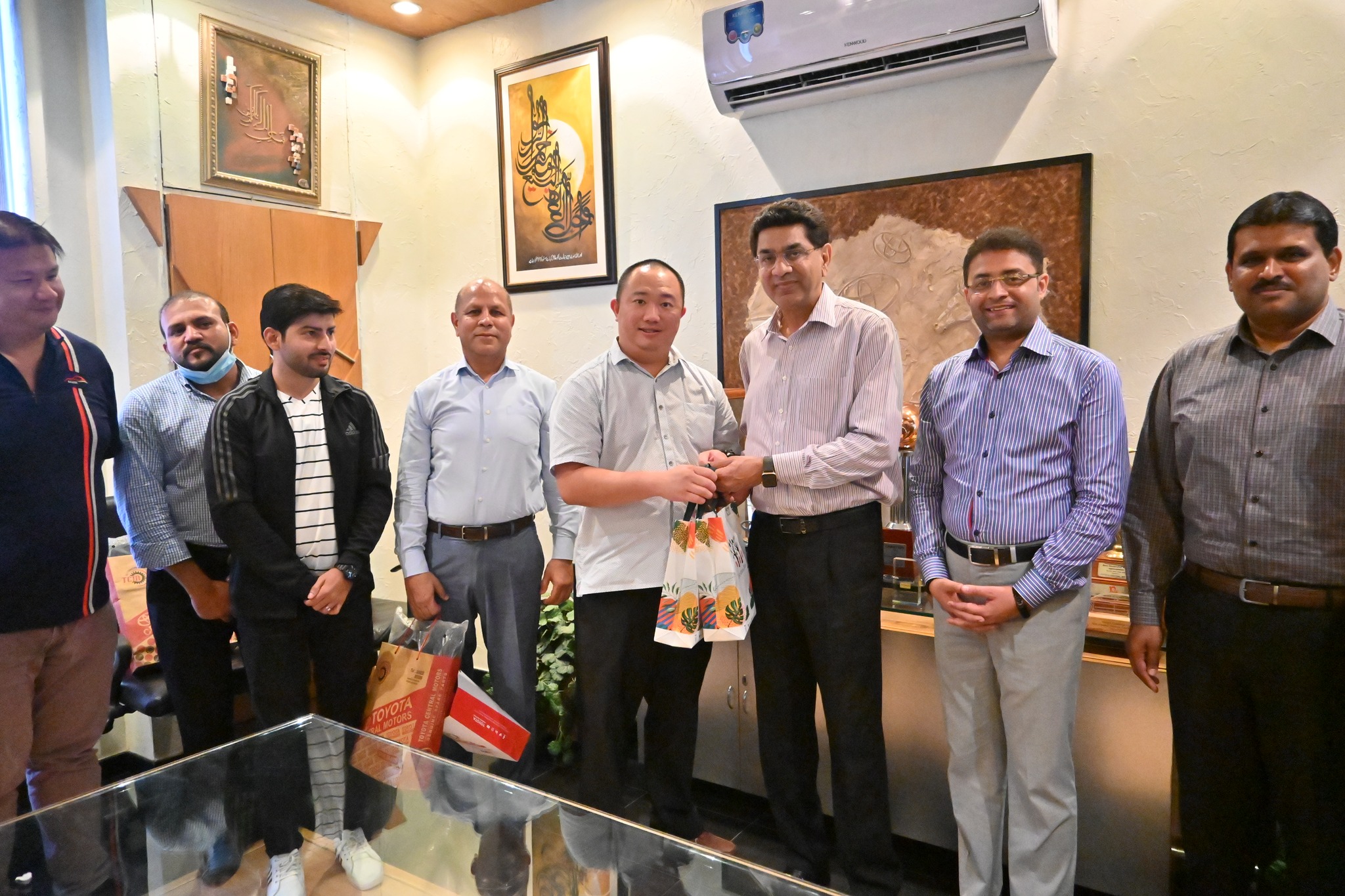 We had the previlidge and honour to welcome Mr. Korukawa, Vice President Mr. Nakamura, Vice President Mr. Timotius Acting G.M. and Mr. Wanajo Project G.M. from Toyota Motors Asia Pacific. The delegates were given a walk around of the entire facility followed by a brief presentation to discuss the current market situation and how well we are geared up to face the upcomming challenges with our dedicated customer services. 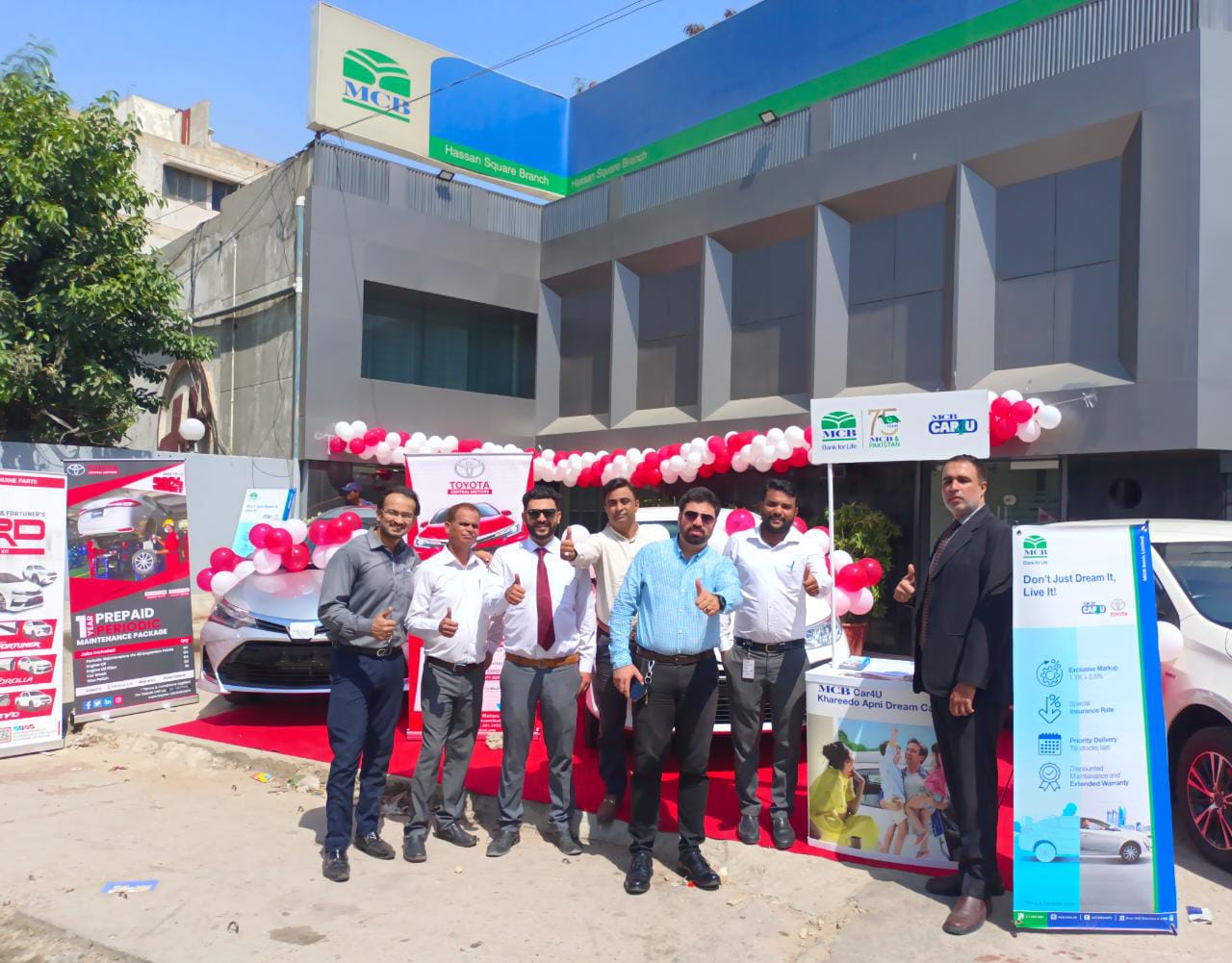 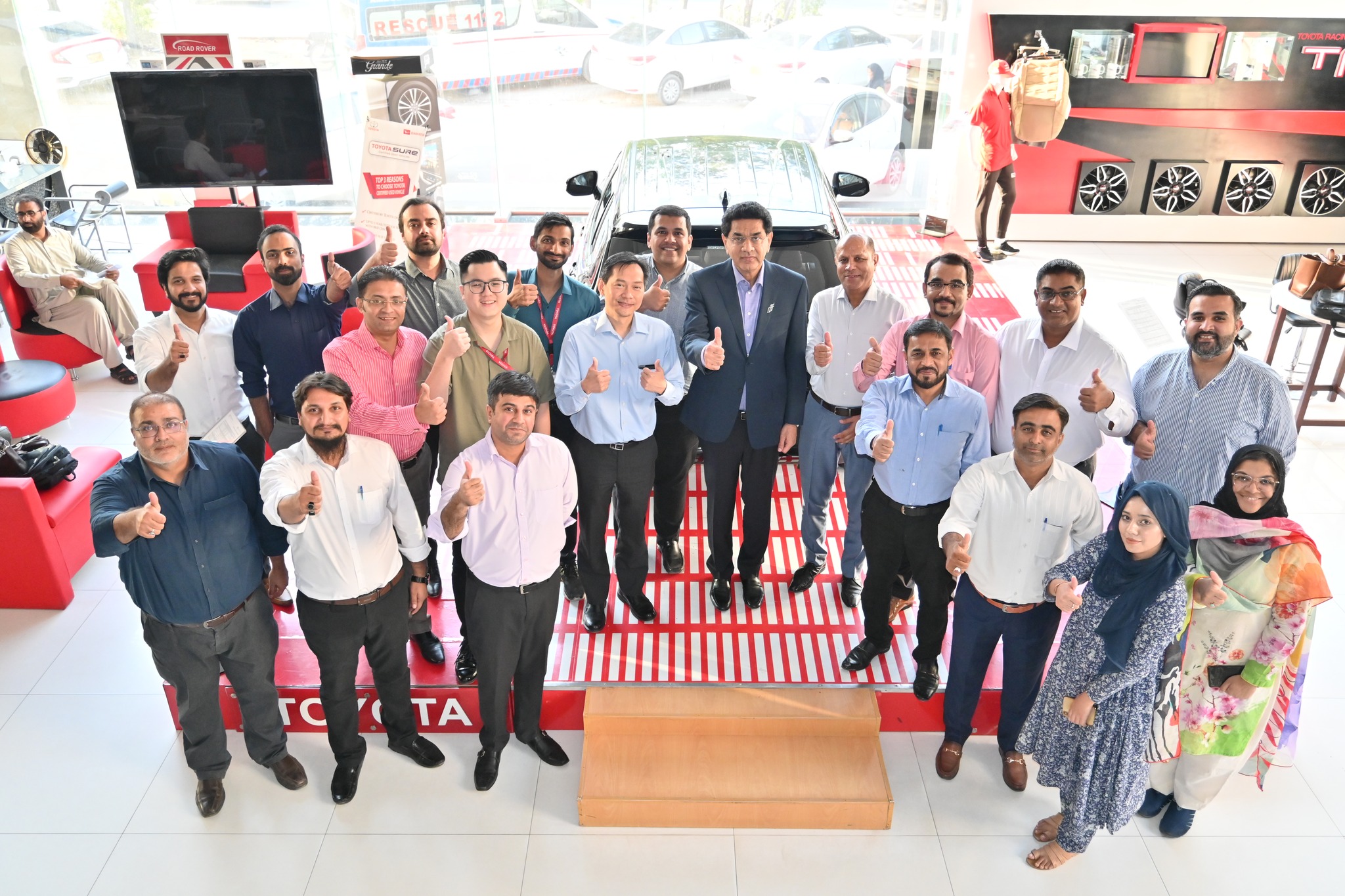 We would like to thank Mr. Atsuya Sugiyama San (Project Manager-Technical Service Dept TMAP) for giving us an opportunity to show him our dealership and the facilities & services provided to our customers at this moment, He was highly impressed with our services and gave a very positive feedback. 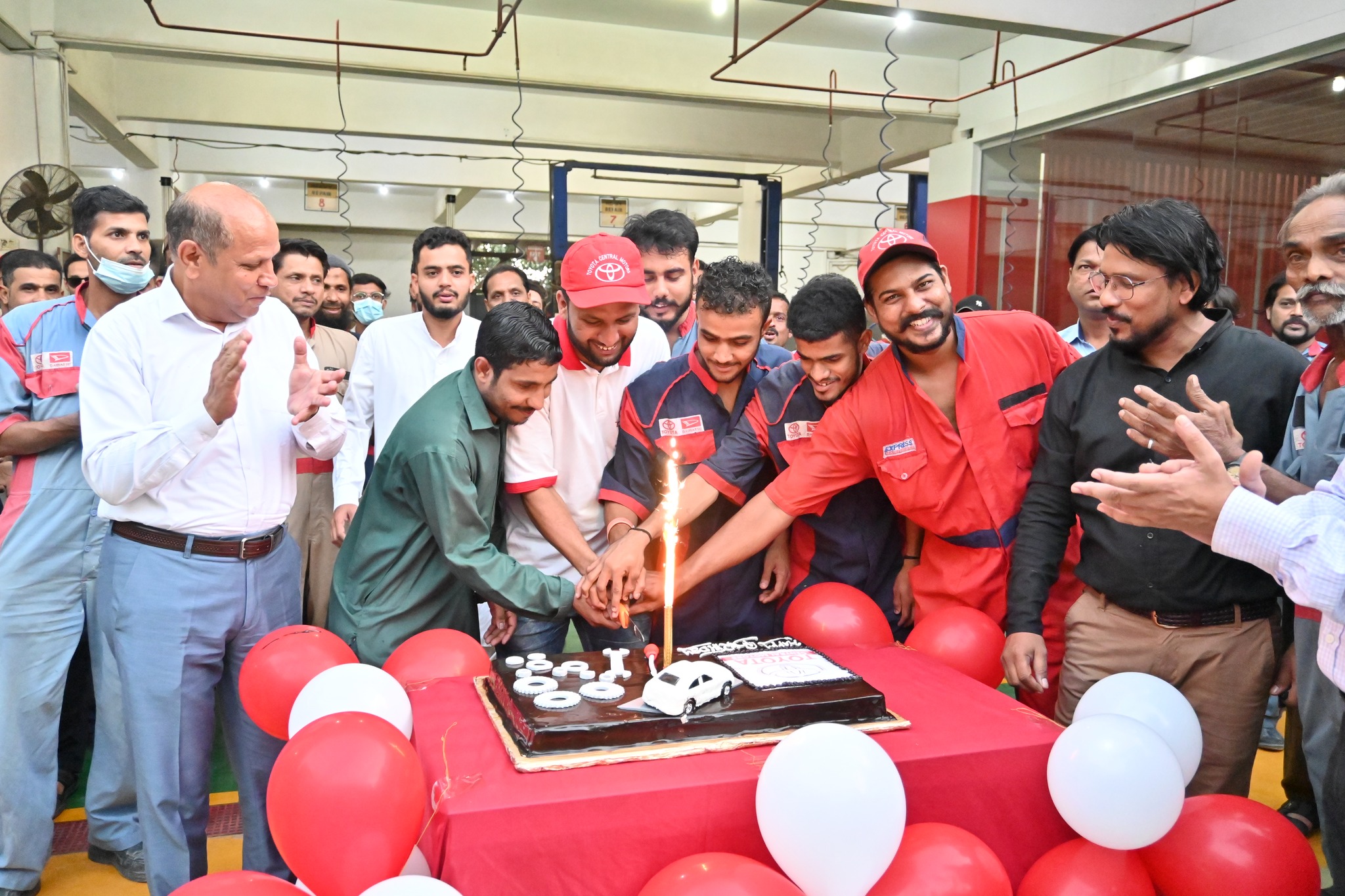 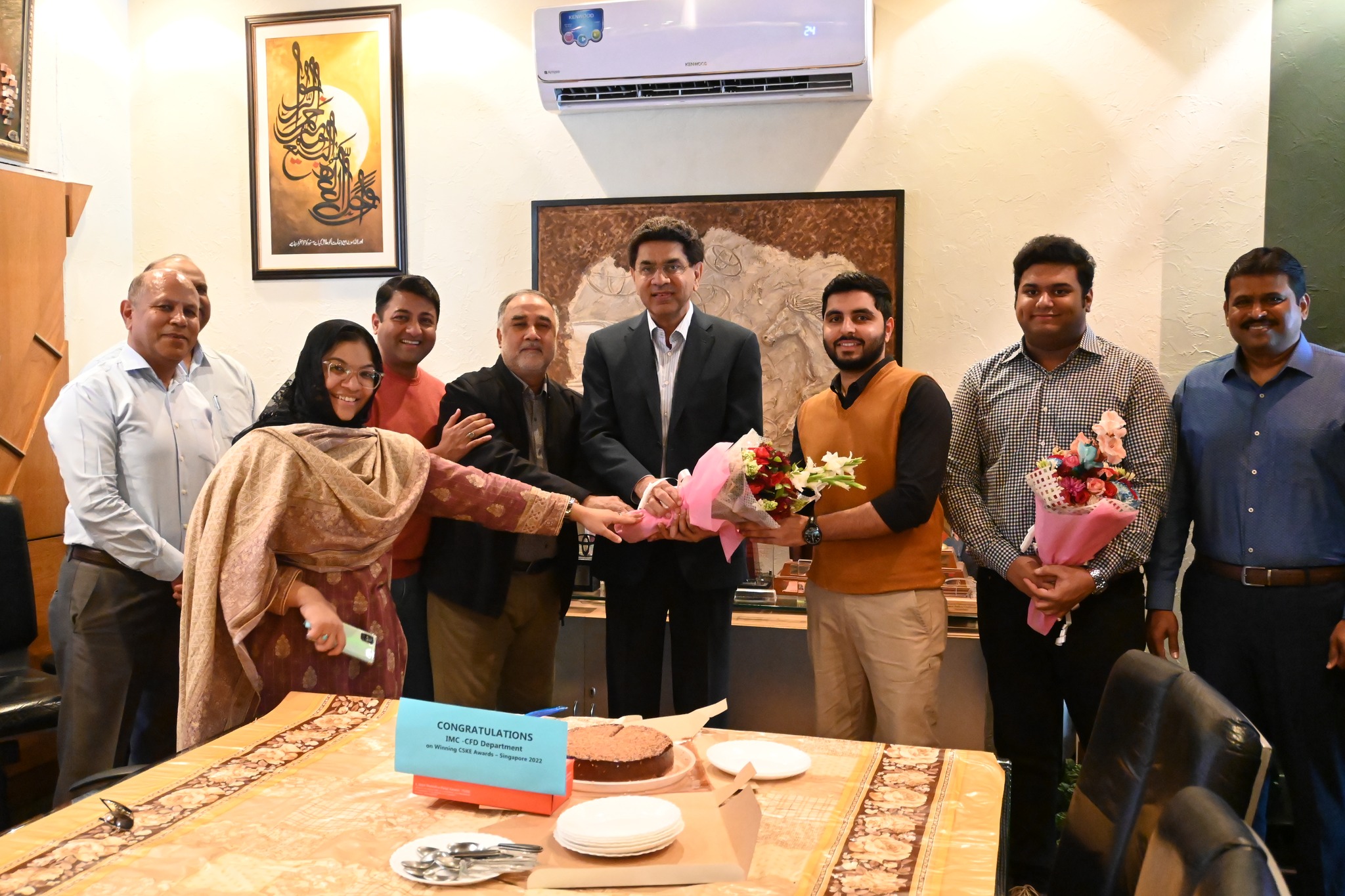 The Toyota Dream Car contest is held for children to draw their dream car freely with amzing ideas. This contest develops the self confidence of children and also creative with new ideas. 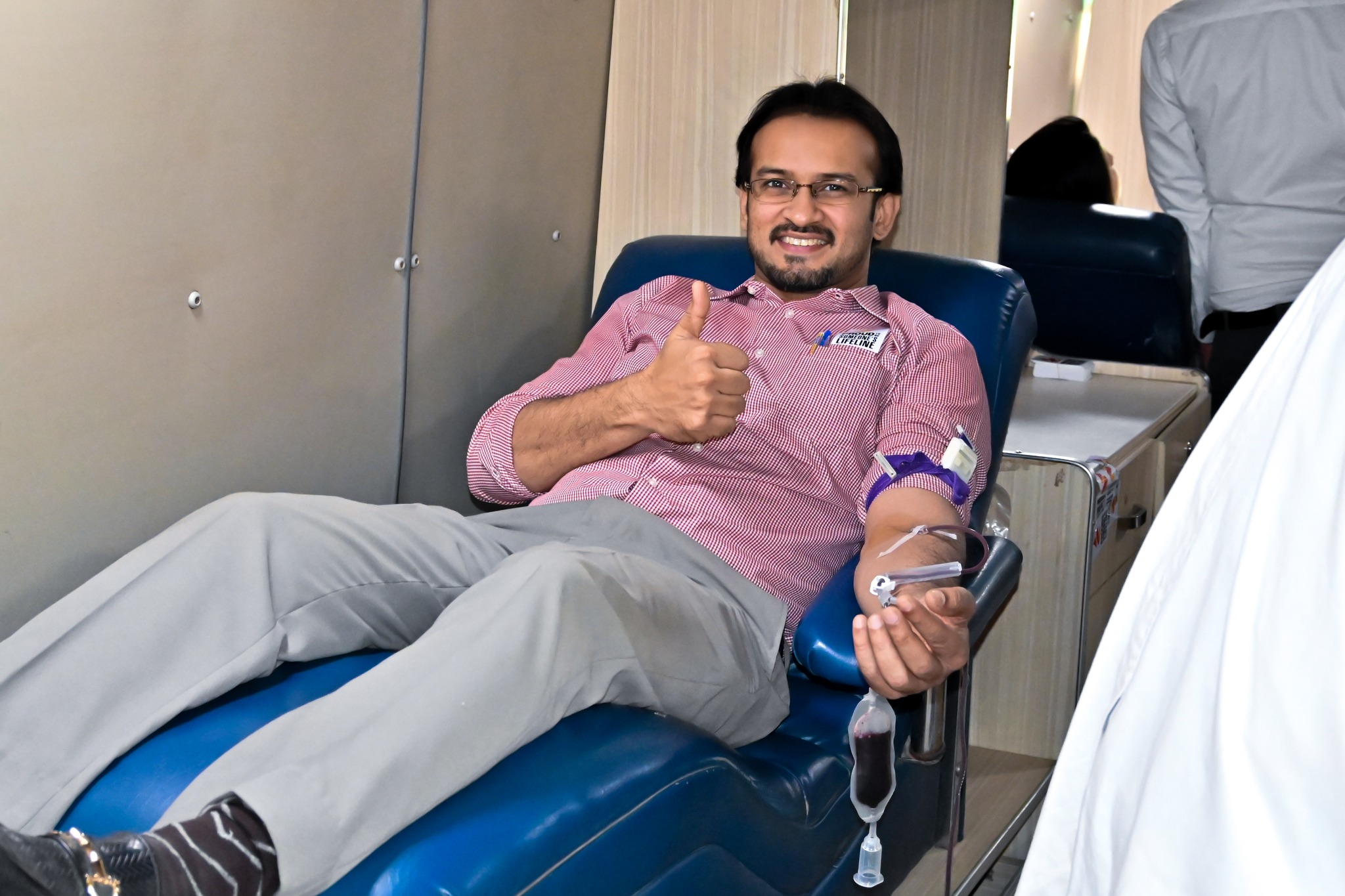 The Toyota Dream Car contest is held for children to draw their dream car freely with amzing ideas. This contest develops the self confidence of children and also creative with new ideas.

The TOYOTA DREAM CAR ART CONTEST is a global contest organized annually by Toyota Motor Corporation (TMC), Japan with about 80 countries participating in the competition and open to ALL children under 16 years, broadly falling in three age categories
Category 1 :  Under 8 years old - Category 2: 8 to 11 years old - Category 3: 12 to 15 years old
This global contest is intended to create opportunities for children, offering them a platform to develop their interest in cars and expressing their creativity and imagination by drawing the “car of their dreams”. 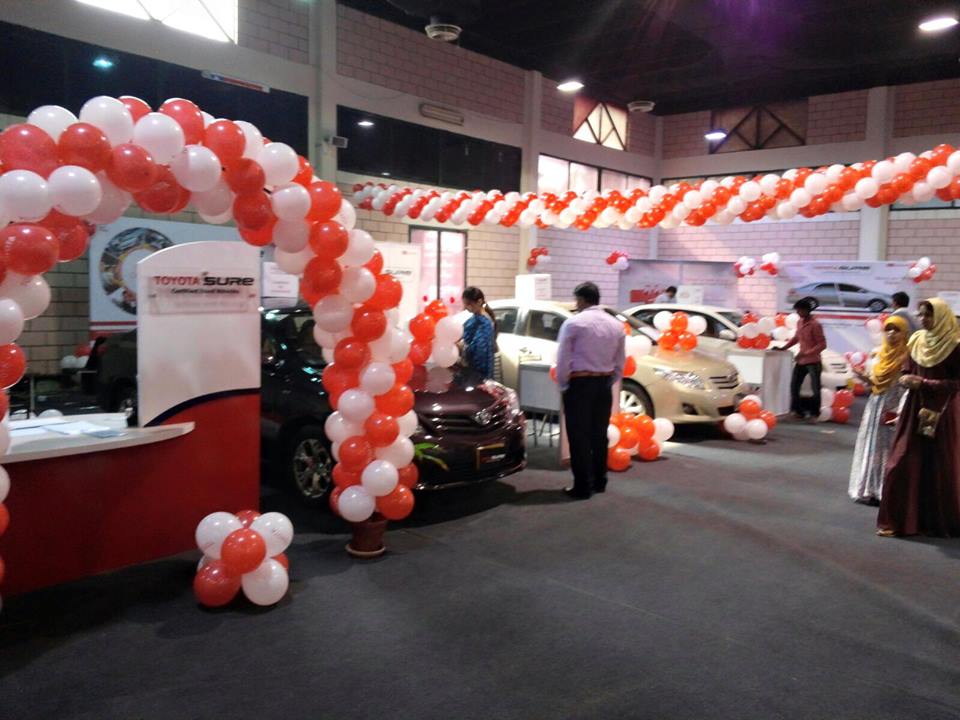 A platform where all the used cars are placed for the customers to get the best deals of used car. 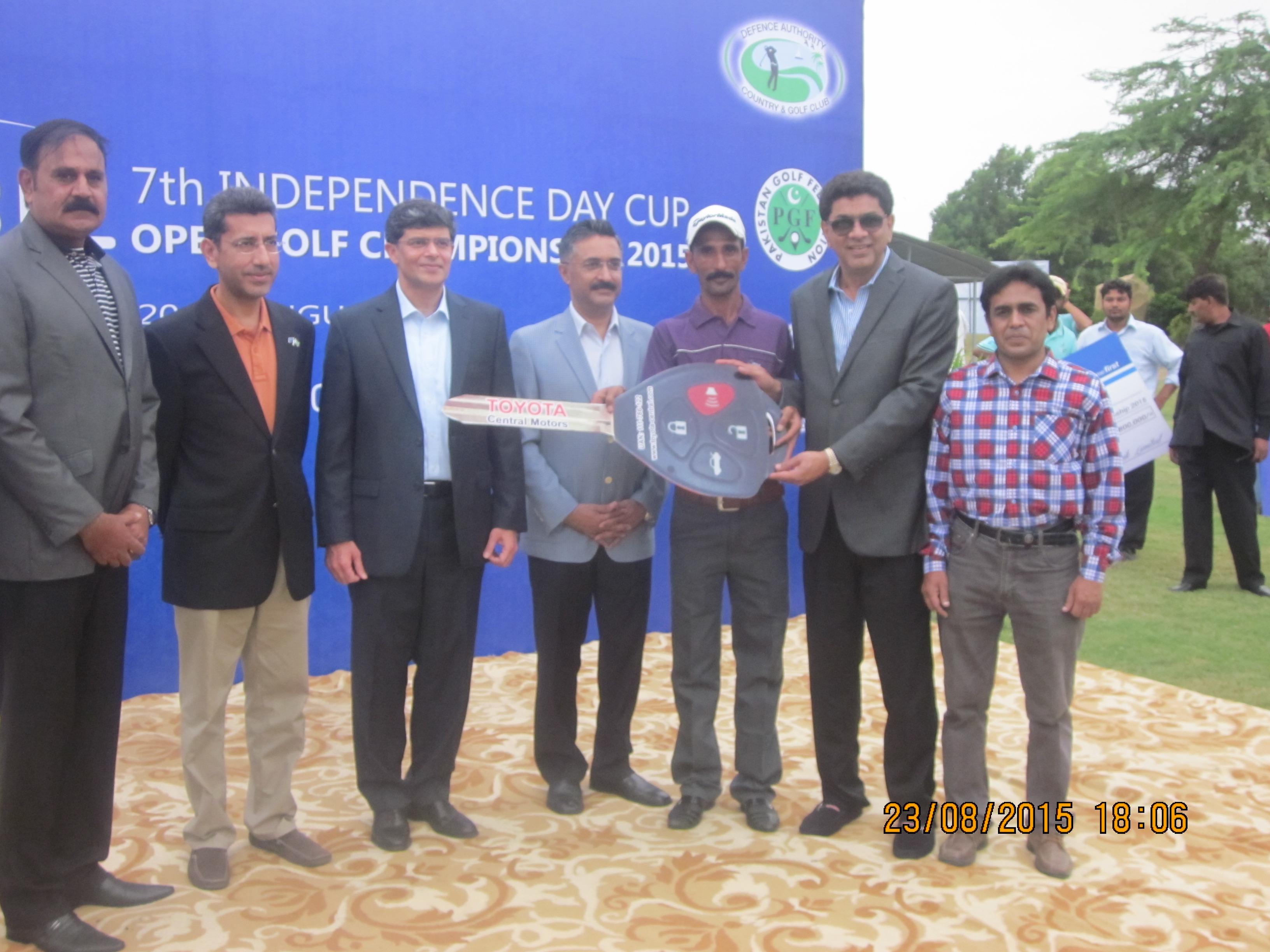 Like everyyear, 7th Independence Cup Open Golf Championship 2015 was held to delight our customers by giving away Terios as a Hole in One Prize. 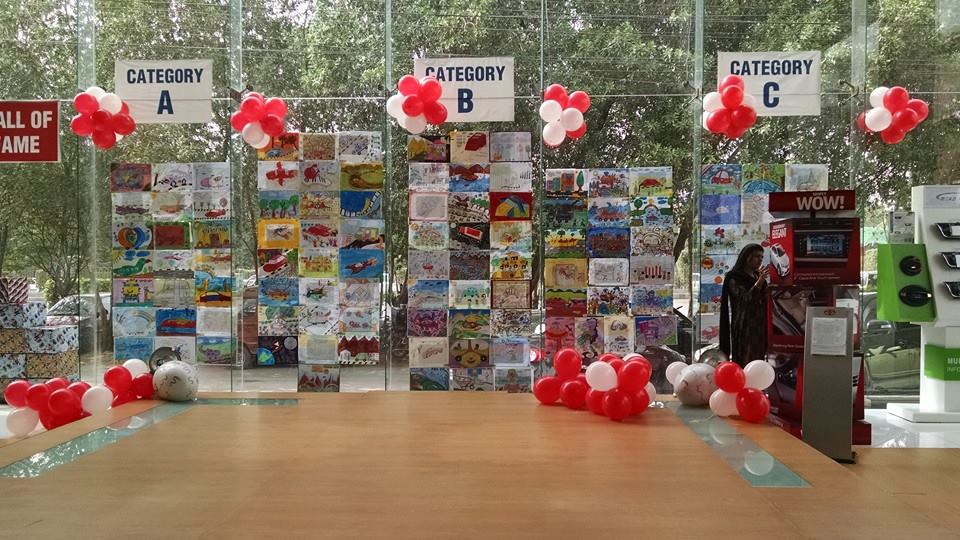 Every year our nation celebrates “Pakistan Day” with great enthusiasm. This year Toyota Central Motors along with Toyota Society Motors sponsored the Chevron Golf  Tournament 2014 by offering  a new Toyota Corolla Gli.1.3 as Hole in One hit prize on Pakistan Day i.e 23-March-2014.TCM/TSCD participated in this event with the support of Indus Motors Company and displayed an armored bullet proof Land Cruiser  at the event . Stall was designed in the customer's point of view where  they can easily look, access and avail the walk around steps by the TCM/TSCD representatives. 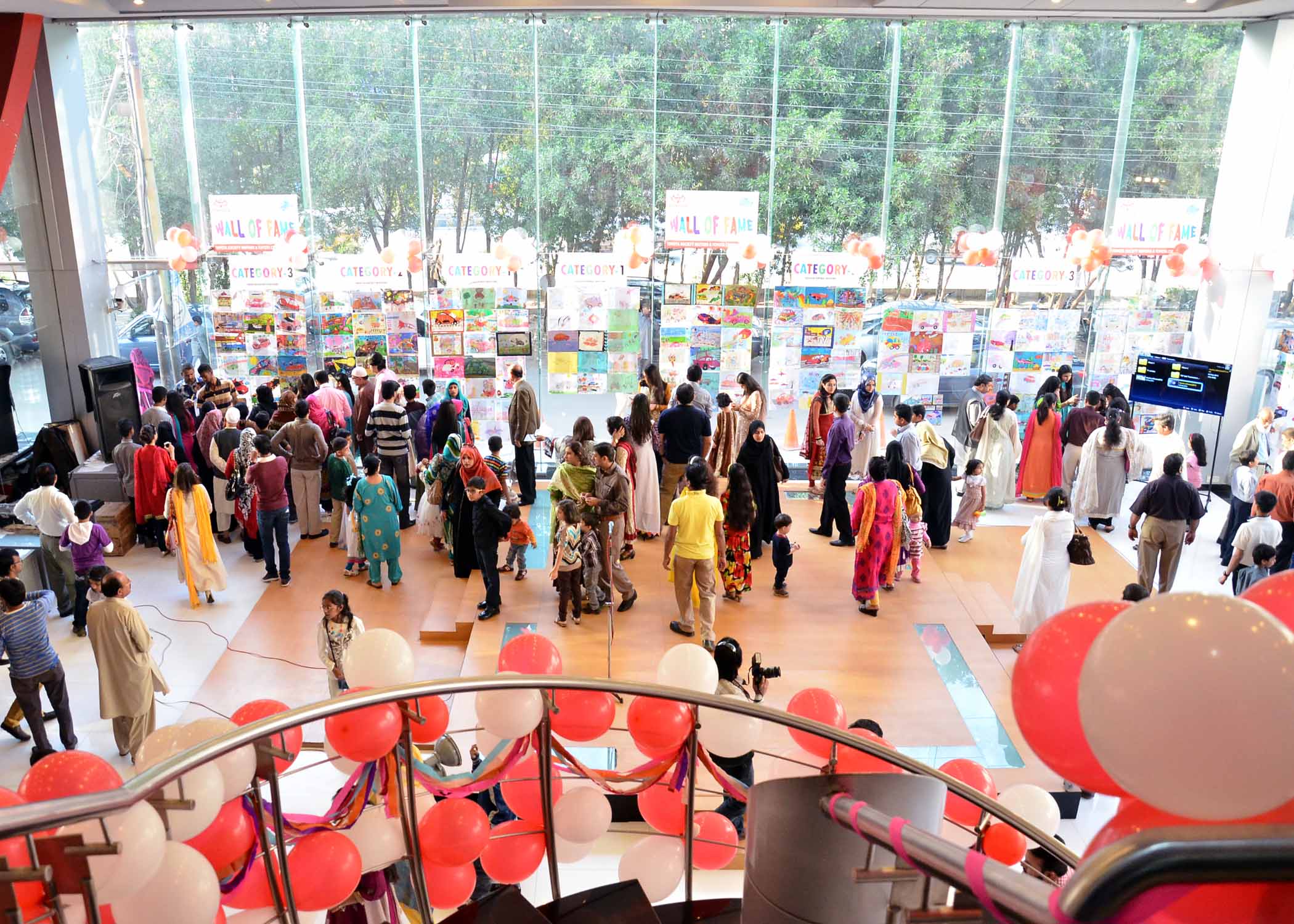 Bank Al Baraka All Pakistan Open Golf Championship was held from 6-9 February 2014 at Defence Authority Country and Golf Club Karachi. This event is a unique yearly National Open Golfing Championship in which amateurs having 12 & below, professionals registered with Pakistan Golf Federation  of category A and B and senior  professionals age 50 years & above participated.
Toyota Central Motors participated in this event with the support of Indus Motors Company and displayed stalls of Toyota Fortuner  armored and non-armored and Toyota Corolla Gli. We awarded the prize of Toyota Corolla Gli Automatic 1.6 CC: Price Rs. 1917,500/- to Hole in One Hit achiever. 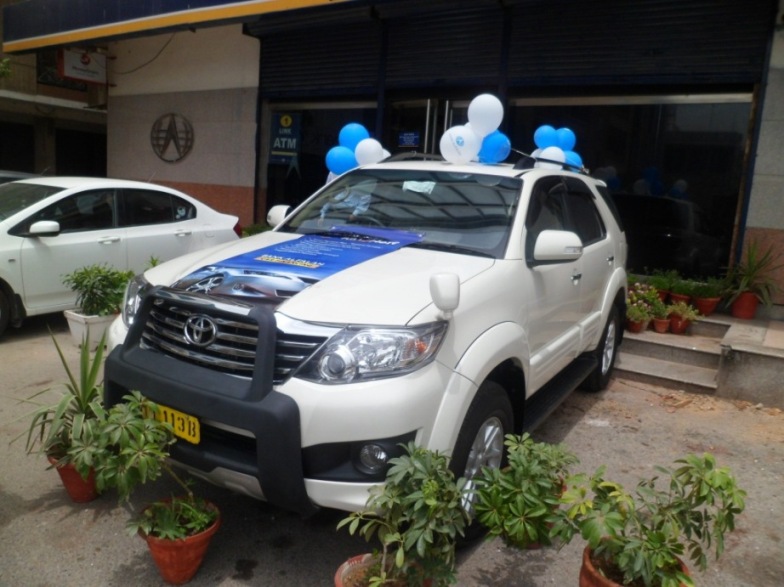 One Day Marketing Activity in collaboration with Bank Alfalah Limited was held on 9th July 2013 at DHA Phase-1 Branch of Bank Alfalah Limited. Our representatives along with Bank's team took part in this activity to promote financing of Fortuner and to aware customers about the financial products and Toyota vehicles.
Launch of Toyota Certified Used Vehicle (TCUV) unit on 19th June 2013,  where used car buyers and sellers get a platform to get an experience at par with new car buyers and sellers. Toyota Certified Used Vehicle (TCUV) is established to promote Sales, Purchase & Exchange of Toyota and Non-Toyota cars. It provides potential customers an opportunity to get their old cars of any make exchanged for a brand new Toyota or a competitively priced used Toyota car.